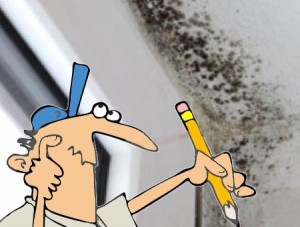 How to Clean mould

Firstly before any mould cleaning takes place you should really try to stop future mould growth, to do that effectively you have to make the environment it lives in difficult for it to survive. As most household mould is the standard black mould you find commonly in bathrooms and showers, it thrives in damp humid conditions, so to make life difficult for mould to grow please read my page on How to cure condensation and also consider reading about what makes the best dehumidifier and how to use it …unless of course you like cleaning mould.

In case you haven’t seen it, this is my video on how to stop condensation. The mould cleaning products and advice below will clean your mould, but to stop it growing back this is well worth a watch. 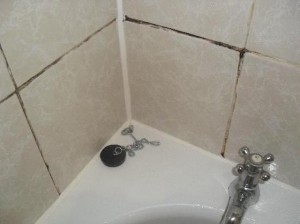 Black mould on grout – This is your standard issue black mould, here confined to the grout only, which is the most common place to find it.

Most bathrooms because of the high humidity level support the growth of mould at varying levels. 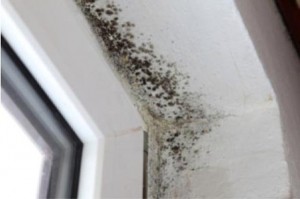 Black mould on windows & black mould around windows – Condensation and moisture is attracted to the window and window frame because it’s the coldest part of the room. Over time it feed the growth of black mould. 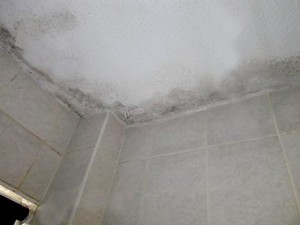 Black mould on bathroom ceiling – Another common place to see black mould, this is normally an indicator that humidity and condensation levels are starting to become troublesome. Sometimes this is due to insulation being short on the outside edges of the plasterboard ceiling inside the loft above.

Most black mould occurs when the house is decorated, this means no porous surfaces like unpainted plasterboard for the mould to sink into, so cleaning is quite simple and effective in most cases.

There is no shortage of people willing to sell you products to clean mould in the home, in fact it’s become a big business and growing. A lot of the online marketing is aimed at frightening you with possible disease then selling you an expensive cleaning solution or paint that isn’t needed. Lets look at some no nonsense cleaning products, washing up gloves and adequate ventilation are a must for cleaning with most cleaning agents.

Having said that never scrape dry mould as this can release spores, and care should be taken not to breathe any mould dust or spores, especially if you are prone to respiratory problems and that includes fumes from cleaning agents also.

How to kill mould and clean it

Bleach – Often Overlooked these days, but I bet your mum would have reached for this first a lot of the time. Mix 1 Part good quality bleach to 4 parts of water. As advised on many Council websites, mould cannot survive bleach but be careful on painted surfaces as bleach can damage colours. Cheap and cheerful, but not the fastest to use.

Mould and Mildew – Quite a few cleaning agent companies like Dettol are doing a product like this these days, good for targeting bathroom grout and fiddly areas. The bleaching agent is very good at removing the black staining created by the mould on tile grout etc. and it can be picked up from most supermarkets. Very good, but not as powerful and easy as HG Mould below.

Specialist cleaning products – Many specialist mould cleaning products are available if you have particularly heavy deposits of mould, one such product is HG Mould Spray that I’ve used myself and recommended to landlords and tenants (be warned it is very strong read the instructions). Super easy and fast, but hard to find in shops or DIY chains.

Anti bacterial sprays – This gets an honorable mention. The same effective mould killing property of bleach based products, but without the stain removal. It will kill the mould but may not get rid of the black staining left behind in something like tile grout unfortunately.

Removing black mold when it gets into a porous surface like carpets, ceiling tiles, plasterboard or drywall can become a problem to deal with. It is extra important to make sure the environment is dry and free from damp so it does not return. It may well be easier to remove and throw away many of such items. If tackling this yourself you may need to search Google for help on specific items or look at Mold clean up for other ideas. 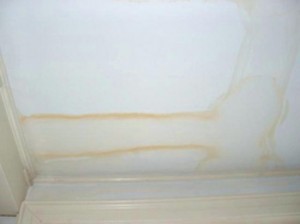 The problem with ceiling staining is that normal painting with emulsion can often allow the stain to bleed back through at any time even if you no longer have a problem, so treating the stain properly is a must.

PVA – The old fashioned and still reliable way to cover a ceiling stain or plaster stain is to use PVA, preferably a waterproof PVA. Mix it 3 parts water and 1 part PVA apply generously over the area of the stain and allow to dry. You can re-coat if you wish when dry.

Cover difficult stains – There are some very good stain blockers now ready made and off the shelf at your local DIY store, one in particular worthy of special mention is Polycell stain block and Stain stop. Available as a paint or in an aerosol and recommended by many of my customers who have used it satisfactorily

The name suggests it can inhibit condensation and some of the marketing states it ‘helps reduce condensation’ which is not possible. A paint cannot reduce condensation, or moisture levels in a house, what it does do is provide a surface that hinders mould growth. My advice is to stop the cause of mold which is excess humidity, see my article below on how to cure condensation.