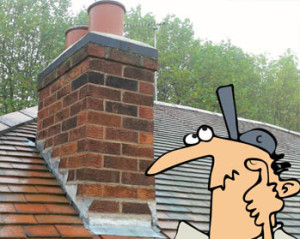 This article gives a brief anatomy of chimney stacks parts and the terms used when describing a chimney, as well as common chimney leaks and associated chimney problems. You will also find other specialised articles relating to chimneys linked from this page.

Starting at the very bottom of the chimney and cut into the brickwork where the stack meets the roof covering are the flashings. In the U.K. these are normally made from lead and are commonly referred to as the ‘lead flashings’ , they consist of a few different components…

Chimney flashing terms – A slate roof has more components to the flashing set than profiled tiles because ‘lead soakers’ are normally not required, instead step and cover flashings would be used (numbered in order of installation). You can see how all of these flashings are made in my links at the bottom of the page if you wish.

Chimney flashings are normally responsible for the majority of chimney stack leaks, the things to look for from inside the loft are staining, damp, or running water around any sides of the chimney stack brickwork near roof height. Also check the timber at the rear of the stack for staining, drips or wetness with the back of your hand.

Leaking chimney flashing – Externally this is the type of thing to look for. Here the lead flashings have become loose and popped out of the chase. Water running down the face of the brickwork will seep in, this can happen around any face of the chimney flashings, also check the back gutter for splits, holes or a lack of cover.

Probably the most abundant and visible part of your chimney when viewed from ground level. What you are actually looking at is the exterior brickwork that forms or protects the internal flues, as well at the chimney structure. The stack itself is not normally the source of any chimney leak, with the rare exception of badly worn mortar joints or porous brickwork allowing rainfall or damp to penetrate and transmit into a room directly beneath, as could be the case in a loft conversion or a bungalow.

I have only seen this on very few occasions over my 30 years of experience, not impossible but improbable. It is however a good idea to maintain the integrity of your brickwork as it’s exposed to harsh weather and driving rain on top of a roof. Check for mortar falling out, or missing to a depth of 3 – 4mm (an eighth of an inch) or more, this may be an indicator that the chimney needs repointing.

Chimney pointing – A prime example of a very weathered chimney stack in need of re-pointing. Here no grinding out of old mortar was required thanks to the severe weathering, a strong 3:1 building sand mix is used to strengthen and protect the brick work stack.

Below is a simple two brick example of a corbelled chimney stack.

Corbelling – This is the brickwork that staggers outwards at the top of the main chimney stack often found just before the flaunching that secures the chimney pots. Its function can be to either add decorative interest or allow the chimney pots bases more room to be fitted internally. Unfortunately this can start to collapse, spread or come loose in later years leading to a re-build or reduction, especially with larger more elaborate examples of corbelling.

Chimney flaunching occasionally referred to as benching, is a strong mortar mix that cements the chimney pots into place. The chimney pots are normally set slightly lower than the top visible course of bricks visible from ground level, a strong 3 : 1 ratio sand and cement mix then bonds the pots and the top course of bricks together to form a tough waterproof protection for the top of the chimney stack. Usually the sand used for the mix is a harsh washed or sharp sand, as this is much stronger than building sand and isn’t prone to cracking when applied thickly.

Cracked flaunching – Things to look out for are cracks that can appear in old flaunching, once the rain and damp gets into these cracks subsequent freezing over winters can expand the cracks further and cause damage to the top of the chimney’s brickwork and sometimes structure. Leaks down the flues themselves are also possible.

New flaunching – The chimney stack has been re-built and the pot set with a strong wash sand and cement mix.

Concrete chimney top – Sometimes the flaunching is actually ‘ cast ‘ onsite with a concrete type mix and the pots are set into it, this is even tougher than mortar flaunching but can on occasion still crack.

The chimney pots sit on the brickwork that forms all four sides of the chimney flue or sometimes a flue liner if those are present. All sorts of different types and styles are used from the small and plain to the tall and elaborate, some may even have designs built into them to stop downdraught or increase draw (updraft). Normally these are trouble free unless faults in the firing process have left them weak, in which case they may crack or flake. Occasionally chimney pots may need to be capped if unused, protected from bird entry, rain blowing down the chimney pot, or both.

The chimney flues connect the fireplaces internally to the chimney pots externally, lots of people with more than one or two chimney flues are often confused on which pot belongs to which fireplace inside the house. To see a video and article on this please see my page linked below on chimney capping, which should make things clearer.