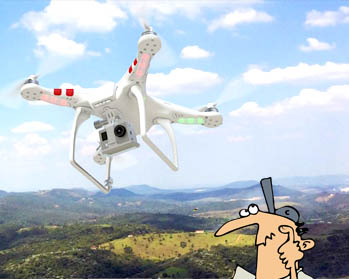 Firstly I have to confess, I am useless with anything remote control. If its on wheels and moves any faster than your average 3+ years fisher price toy car it will probably get smashed up and put in the bin. That’s why I was amazed how easy to fly a good modern quadcopter or aerial camera drone is, even for an RC newb like me to fly. It really is possible to shoot your own aerial photography and video these days for comparatively little layout.

Unfortunately this ease of use has encouraged careless individuals, and legislation is now getting tighter as a result. Operating a drone that is not over your private property or in a direct line of site could land you in trouble.

So for those wanting a quality Ariel survey done by professionals carrying insurance and fully trained operatives, my recommendation is to try a company like Sky Revolutions instead. It may not be as much fun, but it will be a lot better and safer.

What about a drone for fun ?

Last year I bought the highly rated Parrot AR Drone 2.0 from Amazon, I’d seen them on YouTube  and was attracted by their self hovering and anti crash and burn features. That has now been surpassed by the excellent Bebop drone, as seen below.

It wasn’t long before I started to see potential for possible work applications, not just for taking photos to use on this website but for help estimating and evaluating in very hard to reach places, as well as taking aerial pictures and videos of roofs for roof surveying or insurance purposes. Yes a cheap drone is good fun, but It’s not capable of taking the next step and becoming a tool you can work with.

Two or three times a year I get very high buildings where the immediate cause of a leak is not visible from the floor, access is blocked or its just too high for my ladders. This means I have to hire a very large ladder that ties up two men and half a day minimum ferrying it backwards and forwards, this also means extra wages, ladder hire, and it ruins a good work day. Even worse is £500 pounds worth of scaffolding and upwards for a customer, followed by a series of roofers to supply quotations to fix the problem. 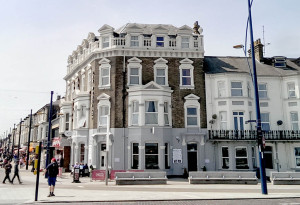 Aerial roof survey – A tall house like this with a leak, it would be nice to have a quick look without ladders wouldn’t it? Arrive on a Saturday or Sunday morning nice and early and you can with a quadcopter. Plan views for bi-annual insurance inspections are also superbly professional. 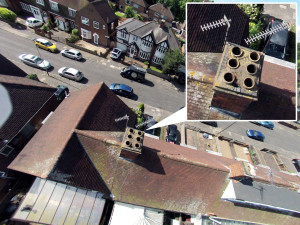 Aerial chimney inspection – As you can see in this picture, even when the drone is flown at a safe height above a roof, a good camera like the Go Pro can take clear pictures of potential problems such as the poor condition of the mortar flaunching to the top of this chimney stack. (5mp photo)

Phantom upgrade – I soon upgraded to the awesome DJI Phantom quad copter and twined it with awesome Go Pro Hero 3 camcorder that can capture crystal clear full HD video, and up to 12 mega pixel still photos. (see further down for examples). I’ve had it for a good 12 months now and it has been great, so far I’ve only used it two or three times for work where it’s been safe to do so (away from the general public) but it has saved me time and money. I also use it to capture images for the website when they’re needed.

With a little imagination and an awful lot of spare time you can make fantastic promotional videos for any company or event, have a look at the video below and see what these have done with a basic setup and a bit of thought. YouTube can be a powerful marketing tool these days with a good video that’s engaging.

The real beauty of a quadcopter drone like the Phantom is the user friendliness of it, here is what I think makes it so easy to fly…

There is now a second of this quadcopter called the DJ Phantom Vision 2 with on board camera and a fantastic optional gimbal, but for me I wouldn’t bother for my non cinematic uses. Yes, there is a version with a good HD camera built in but this is really the problem for me, the cheaper option without a camera means you can choose any HD camera you like on the market and upgrade at any time, even to the new Go Pro Hero 4 when it comes out with native full speed 2K and 4K video recording.

For my purposes there really is only one camera, the super slick Go Pro Hero range, I’ve had other video cameras but nothing really beats this as far as I’m concerned. It shoots crystal clear video and takes great pictures in a variety of different modes, it’s light weight, takes a beating and is waterproof to 60 metres.

GoPro – You can see the these being used a lot on the TV these days, like wildlife or documentary programs. They come in 3 variations, white, silver and black, this isn’t the colour of the case but a grade of the cameras technical specifications as can be seen on Go Pro official site where they’re available to buy, but cost more than re-sellers like Amazon.
If you do buy one, buy the best one you can afford because you’ll have it a long time, always check for discounts on Go Pro on websites like Amazon where they are normally cheaper and delivered faster than direct from the manufacturer. I bought the silver and it is fantastic, but even now there’s a part of me that wishes I’d have bought the black version, but to be fair I didn’t know it would be as good as it is at the time. Again you can do a lot of professional high quality promotional videos with one of these and a little bit of imagination, or just have a lot of fun with it on holidays.

Now it takes quite a bit to sell me some extra stuff, and I’m not exactly a lover of all things remote control as a norm, but I have made two upgrades since purchasing which I thought on balance were worth the investment once I realised that I hadn’t smashed it to pieces, and probably wouldn’t. 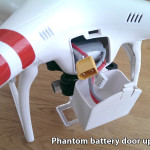 A large battery door – The one that comes with the phantom is a little tight for space when connecting the power wires, don’t get me wrong its perfectly useable but I purchased a second battery to extend my on the job fly time, and it makes life easier. Basically it’s a third party effort sold on eBay or Amazon and made by enthusiasts with a home 3D printer, but it’s great. 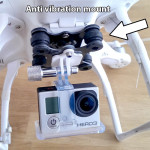 Anti vibration mount – This is a little mount that supports my Go Pro on some rubber dampers, its sole purpose is to remove as much vibration as possible to counteract what they call the ‘ jello effect ‘ in video captures, this occurs when rapid acceleration or gusts of wind cause the motors to accelerate rapidly causing vibration. Now to be honest I didn’t really notice a problem before but for what they cost I upgraded.

Carbon fibre propellers – I haven’t got these and probably won’t bother either, not because they’re not brilliant, but because they represent a increase in danger for me and those around me. The stock plastic versions are already dangerous, carbon fibre is tougher, less bendy and sharper, this isn’t a great combination in my hands. But for serious users they offer a good upgrade especially when balanced.

Best of all for me has been using it for elevated photos of buildings, the pictures taken for surveying reasons are just so much clearer and more professional than Google satellite images that I used to use. Now on a plan view I can list all valleys, downpipes and important drainage features for commercial building insurance. Because I charge more money for the initial survey with pictures, it’s nice to give a client value for money and it never hurts to establish a good impression and relationship with the insurance company’s either. 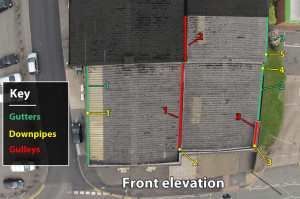 Aerial roof surveys – This is the type of picture I would now enclose into a commissioned roof report. Often it is vital for insurance companies to have bi-annual reports where valleys and gutters may become blocked, especially in the case of this one unit being multi-let to separate tenants.

Many times expensive houses or commercial plots are sold online with woefully inadequate shots of the land that is for sale or comes with a property, have a drone and camera and it’s job done. The images below have been reduced in size and quality for faster loading, the originals were very large. 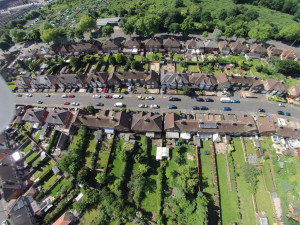 Aerial survey – Houses with land or plots quickly become clear and to scale, location and proportion. (5mp still capture from GoPro) It only takes 5 – 6 minutes to capture images like this, simply set the Go Pro into time lapse mode and the mega pixel resolution you require. 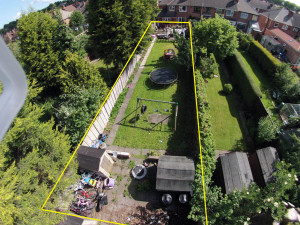 Aerial garden photography – Perimeters and outbuildings can be quickly and clearly defined.A 5mp photo from the Go Pro in the time lapse mode at a rate of 1 photo per 3 seconds, fly about a bit, change height a bit and land. Easy.

One good use would not only be photograph or video from a birds eye view for promotion, but also for instance with a caravan park you can easy see the whole site for planning and optimising space much more effectively than at ground level, or using out of date Google satellite images.
The above picture is captured from a 1080p video but is displayed at lower quality due to cropping, if captured from super HD 2K or 4K the quality will obviously be even higher.

Maybe one could be useful to you or your business, or at the very least you could have some fun with it.