First I totally understand the misery of condensation and mould, and together we can cure it. I have been advising on and curing condensation problems for the last 30 years. Condensation marks, as well as mould on ceilings and walls are often mistaken for a leak, which means I get called in to investigate. In fact I’ve been doing this for so long I’m often employed by Landlords and estate agencies to help suffering tenants. I have quite literally seen thousands of mouldy and damp properties.

So now you know I know what I’m talking about and not copying snippets of second hand information from other websites like a lot of people seem to do, let’s take a look at the most common causes of domestic condensation problems for over 90% of people.

For those of you who haven’t seen my video on how to stop condensation, this will take you through the basics, but please read the rest of this article for more practical steps that actually work.

To check that your condensation isn’t caused by a roof leak, and you’re not wasting time fixing leaks that are in fact condensation, check out the advice on how to tell them apart under these top 10 tips.

How to stop condensation

What do dehumidifiers do

This web page is dedicated to curing condensation and mould without cost wherever possible, but there is no doubt that a dehumidifier can be a game changer if used correctly. In the UK even as early as October the outside humidity can reach between 70 – 90%, so opening the windows can let damp air in if you are not heating your home at the same time, which can be costly.

All good dehumidifiers have a built in humidistat and will keep a normal 3 or 4 bedroom house at around 50% humidity without any real effort. If you also keep in mind that dry walls, plaster and brickwork will mean a warmer house because dry air and walls insulate better. This will mean lower energy bills too.

A good small to medium sized dehumidifier on the other hand can remove up to 12 litres of excess water from the air a day, as a bonus you can stop ventilating and close the windows to keep the heat in, which is contrary to advice if you’re NOT using a dehumidifier.

As we have already mentioned drying laundry on clothes airers and radiators in winter is a major contributor to indoor humidity, damp and condensation. If you use a dehumidifier however, you can dry clothes indoors, even with the windows closed. This is because a good dehumidifier will collect all evaporating moisture.

By placing a dehumidifier in close proximity it will collect all the evaporating water at up to only 20% of the cost of using a tumble drier, some even come with a built in laundry function. You can read about how best to deploy a dehumidifier and some of the best units available on my dehumidifer page.

What does a roof leak or condensation mould look like

These are just some of the pictures I’ve taken whilst at work helping clients.

Stains on ceilings – These are typical stains on bedroom and bathroom ceilings. A leak in well over 90% of cases has a brownish look to it, just like spilt tea or a tea bag stain. A condensation stain on the other hand looks shadowy or damp, with no brown colouration. Later on the damp wall or ceiling will grow mould, usually black, as seen in the picture. Now you know how to tell the difference between mould, condensation and roof leak stains.

Condensation on windows – I’m sure everyone is familiar with this to some extent, the classic condensation formed on glazing or double glazing. This can be seen in Autumn and Winter in the UK, especially after a good nights sleep. If you have visible water droplets like this you have excess indoor humidity, worse than this and you have a condensation problem. This can lead to dampness elsewhere and the growth of mould.

Mould on walls and mould on ceilings – These are typical black mould marks caused by condensation. A leak almost never creates this type of mouldy mark, instead a leak nearly always makes a light brown looking stain. In well over 90% of cases mould appears on colder outside walls and ceiling edges.

Mould behind furniture – Mould is often found behind beds or other furniture situated close to outside walls that hinder airflow making it a good place for mould to grow. Condensation and black mould is also often found inside and outside wardrobes, and above skirting boards.

How to cure condensation

To cure condensation, especially without a dehumidifier you need to understand how it works and what you can do to affect it, so we will take a quick look at these key points.

Condensation is caused by airborne moisture, millions of minute particles of water suspended in the air. When it comes into contact with a colder surface like glass, a cold ceiling or wall, it reaches dew point and turns back into water droplets.

If you breathe on the surface of a mirror you see a fine fog form on the surface right? That is condensation in its simplest form, and a few seconds later it evaporates away into the air. It’s not gone though, it’s just invisible again, now floating in the air around you, waiting to form water droplets on a cold surface.

Condensation in houses is caused by a build up of excess moisture created by everyday activity, think of it as an invisible indoor fog. The trouble is that a family of four could create over 15 pints of moisture per day, but a typical 3 bedroom house may only naturally ventilate 2 pints per day without help.

Thermal image of a home – This is how your home may look to excess airborne moisture. Everything blue is attractive, and everything red or yellow isn’t. That makes external walls, ceilings near external walls, and windows a top target. Condensation will be visible on windows, but not usually on walls until the problem is bad or has caused the growth of black mould.

In times gone by houses would have had single glazing, air vents built into the brickwork and open fireplaces that would have literally drawn any stale air outside. Whilst this may have been a lot colder to live in, the air was constantly refreshed.

Welcome to the present day, now we try to keep the heat in as much as possible, double glazed windows, doors, draught excluders, insulated cavity walls and roof spaces. In fact some of you may have only noticed a problem AFTER insulating your home in some manner. With energy saving it’s all about keeping the heat in as much as possible. Unfortunately that also means keeping the air in no matter how damp or stale it has become.

Top contributors of mould and condensation

I know we’ve already talked about some of the causes of condensation and mould, but its worth looking again. You may not be able to stop any of these, but by using my top tips at the top of the page you can cut down on them as much as possible. It is also a very good idea to know the ideal indoor humidity and try to get as close to it as possible, particularly if you’re in a multiple occupancy home, or not using a dehumidifier.

Unfortunatley the activities above are normally concentrated at the same time of the day – the evenings. We get home from work, cook, shower etc. then sleep.
Just for good measure in the morning we then close all the windows and doors locking the damp air in, turn off the heating and go out.

The trouble is OUTDOOR humidity levels rise in the UK from early October through until late March. The months shaded in red are the worst, and it is not uncommon for humidity to peak over 90% during these months. You can find the current humidity for where you live on the BBC’s website by typing in where you live in the box provided.

So if you are trying to control condensation and mould you really could do with help measuring the moisture content of the air inside your home. Let me introduce you to a fantastic low cost tool, the Hygrometer. 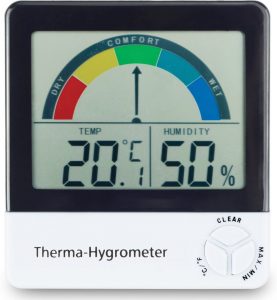 Indoor humidity test – I cannot recommend enough the use of a simple digital like this Humidity Meter or Hygrometer for monitoring your indoor humidity. It is a vital and cheap tool that will allow you to keep tabs and monitor your progress.

Out of control condensation

I get to see two or three of these a year, and this is when condensation has got so bad that the walls, wallpaper or plaster is damp to the touch. I have seen walls literally dripping with water trickling onto the floors. This is where condensation has soaked through the plaster and brickwork internally, this then conducts cold from the outside even better than before, it then becomes a vicious circle and begins to run away with itself. You do not want to be here!

If you think this is the case buy or hire a good dehumidifier, get a humidity meter and follow as many of my top tips as possible. Be methodical and consistent in your approach. Consider getting your roof and gutters checked by a reputable firm or ground floor walls checked for rising damp.