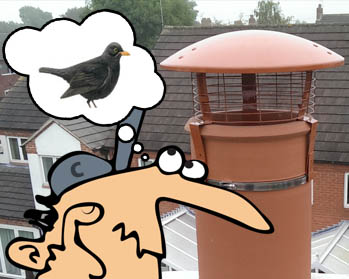 Cost of fitting a chimney cowl

Unless you are confident on ladders and access equipment, it may be easier and safer to bring in a professional chimney cowl fitter or roofer. See my article on how to find trusted roofers at the bottom of the page…

As an example of fitting costs, you should allow for an average £100 fitting charge for most standard easy to reach pots, with the cost of purchasing the cowl being an extra. Multiple cowls on the same stack should not increase the fitting price for standard designs, although very high or hard to reach chimney stacks may increase costs if the installer needs to set up multiple times. Obviously if scaffolding is required that will also be an added extra.

A chimney cowl is normally a metal attachment that fixes to the top of a chimney pot to enhance or improve the basic function of the chimney pot or chimney flue, these improvements could be for example…

Wire balloon – Let’s start with the galvanized wire balloon, otherwise known as the ‘bird cage’. Whilst this isn’t strictly a cowl, it will keep the birds out of a chimney pot and not alter the function of the flue. They are often cheaper to buy than a cowl, but as a downside they can rot prematurely depending on quality, be pressed into a pot by a heavy bird or blow out it the fit isnt perfect, which it often isn’t.

To stop bird entry – Birds can not only be a nuisance and enter the house through open fireplaces potentially damaging decorations and furnishing at great cost, but can also be hazardous when blocking the free flowing escape of deadly carbon monoxide gases from gas fires. The rotting corpses of dead birds trapped unseen behind a gas fire can also cause unpleasant smells and a plague of flies as the maggots develop.

To stop rain entry – Sometimes rainfall can create damp patches on chimney breasts inside the home. These are generally noticed in upstairs bedrooms and are even more common where the loft space has been converted, or the height of the roof between the apex and the ceiling is lower than other properties. A bungalow or a house with a shallow pitched roof are prime examples, often a homeowner with this type of problem will report the problem being worse when the wind is in a certain direction.

To increase updraft – There are a variety of conditions where you may find that a chimney may not suck the fumes up the chimney flue as well as it should, this suction is often referred to as the ‘draw’. If the draw is too little two common methods of fixing this are with a ‘spinning’ cowl or alternatively a ‘self adjusting’ cowl, often called ‘wind directional’ cowl. Read more on this further down the article…

To stop downdraught – Down draught is normally a sporadic problem often caused by wind direction (most often the North). Tell tale signs with solid fuel chimneys like coal or wood are puffs of air / smoke being blown back down again. With gas fires it can make them flicker or occasionally be blown out, often the cure here can be to fit and ‘anti downdraught’ cowl, more on this further down the page.

The spark arrestor – As the name suggests, the function here is to stop sparks and embers being blow onto thatched roofs and other highly combustible sources. Although specified by some insurance companies extreme caution is also required, regular cleaning is absolutely essential to ensure it remains very clean. A buildup of deposits on a spark arrester chimney cowl is potentially more dangerous than not having one at all, for that reason lots of insurance companies are moving away from recommending them.

Unless you think you need specialist advice you can actually fit your own chimney cowls quite easily as long as you work safe, (correct access equipment) and are competent to do so. Before attempting any chimney cowl installation, I would however recommend you watch my video on chimney flue identification and pot size estimation further down the page.

Chimney cowl install – In this video I show you how to fit three common all purpose cowls. Often this would be to stop birds and rain, whilst being suitable for multi fuel types.

By far the most common chimney cowls I’m asked to fit are dual function, firstly to stop birds falling down the chimney and secondly to stop the rain blowing down the flue. A low cost example of this would be the Mad Cowl or similar, and if you’re looking for the best chimney cowl to stop birds and rain it’s a good low cost solution. There are a number of unobtrusive solutions on the market for this same purpose, and some of them are also ‘multi fuel’ meaning should you wish to change your fire to burn a different type of fuel you will not need to change the cowl again. A good example, and a firm favorite in the roofing yards is the Colt Top or Colt Top 2 which is considered by some to be one of the best chimney cowls to stop downdraught, birds and rain as an all in one package.

The first thing to remember when browsing through chimney cowls is to match up the correct fuel types, it’s all too easy to get carried away. With a few clicks of the mouse you can navigate away from where you were and purchase a cowl that is unsuitable for the type of fuel you are burning, or even worse, potentially dangerous.

Common fuel types are Gas, Oil and Solid fuel. Solid fuel may mean coal or wood for instance, or it may be quite specific. A lot of common chimney cowls for stopping bird entry, rain entry or anti downdraught can be bought as ‘multi fuel’ which is great but again make sure at final checkout you haven’t navigated to one specifically for a particular fuel type that you don’t own.

The next step is to make sure you are working on the correct flue and pot. I know this sounds obvious but mistakes do happen and I have come across cowls fitted to the wrong pot, so I know it happens. Mix ups like this can be dangerous so don’t take chances watch the video below.

Which flue is which – This video deals with flues, pots and testing. It also covers estimating a chimney pots size from floor level without the need for getting up close and personal.

Sometimes chimneys have very little exposed pot or are an extremely awkward shape, in which case an internal pressure bolt version otherwise known as ‘clamp’ or ‘hook fix’ may be the only option, or simply provide a better fixing.

Clamping Chimney Cowl – This is a Hook fix chimney cowl. As you can see in the photo the chimney pot is flush with the flaunching (cement top) , so flush in fact I had to bed the mating surface of the cowl to the flaunching with sealant to ensure no water dribbles down the flue later.

It is very important when installing a chimney cowl with pressure bolts to ensure a nice even pressure across all four bolts in small increments without going berserk and distorting the metal. Another detail to look for is that the thread which passes through the cowl nearest the chimney pot doesn’t get snagged and provide a false resistance, making you think you have a grip on the pot when you may not.

How to increase chimney updraught with a cowl

Assuming the chimney is swept and not blocked in any way, a lack of updraught or poor ‘draw’ can be simply sporadic, or a more persistent problem. Assuming the chimney stack or pot is high enough, (normally above the ridge line) and there are no obstacles in the way like trees or very close tall buildings, this should put you in the sporadic category. Often the cause here is wind direction and that can often be corrected with a spinning cowl or something like the excellent Windkat cowl which can also be seen or purchased on Amazon if you wish to compare prices or products.

Updraft cowl – Two common and effective solutions for solving updraft problems or increasing updraft. The spinning cowl like the mad spinner cowl isn’t cheap, but it costs less than the better but more expensive Windkat. They are both cheaper than retro fitting larger pots or brickwork chimney extensions however.

Occasionally the lack of draw is more persistent. The culprit more often than not is that the chimney or chimney pot isn’t high enough. This leaves the top of the pot in a location that is too sheltered from air movement, or prone to wind swirl near the top of the roofline.

A higher chimney stack – The long term solution may be to increase the height of the brickwork, swap out the chimney pot for a taller version, or both. Swapping the chimney pot is obviously cheaper, but the base of the pot must sit safely inside the brickwork or allow enough flaunching to secure the pot from strong winds.

Another factor to consider can be trees that may have grown over the years to obscure the wind, or houses may have been built in close vicinity, and this is also true for downdraught problems below. If you want to read more about chimneys see what Wikipedia has to say.

Most downdraughts can be stopped by fitting an anti downdraft cowl, all this really does is stop the wind quite literally blowing down the chimney or creating air pressure above the pot. Downdraft can be caused by swirling wind or a change of wind direction, and again this can be due to the close proximity of trees or buildings as talked about with a ‘lack of draw’ mentioned earlier. Sometimes I have seen customers who have not had any problems for years suddenly get downdraught problems, and it turns out to be fir trees planted on borders that have been allowed to grow very high, if this is the case tree pruning is often the only effective solution.

Anti downdraught – Normally anti downdraft cowls also inhibit bird entry by design. Sometimes the wind directional version will not have any mesh fitted however, so if you have a bad bird problem check with the supplier first.

Often I come across customers who have installed a simple chimney cowl to ventilate a disused chimney or fireplace, and it will works very well. However if your fireplace is an open hearth for decorative purposes, or has been bricked up and fitted with an air vent you may lose a lot of your expensive heat up the flue. An open cowl on a pot will still allow the chimney to function at a high capacity drawing the heat up, away and outside. As an alternative you may wish to consider a chimney cap like the C-Cap which will trickle ventilate instead, these can be seen with sizes and fitting instructions in the links below on chimney capping.