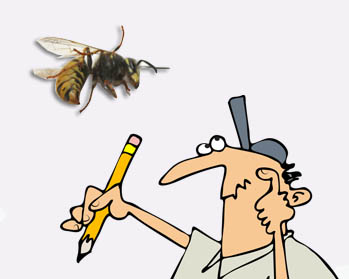 In this article I’m going to share some practical wasp killing knowledge that should allow you to leave a whole wasps nest dead for under £5 in under half an hour, or if you don’t fancy doing it yourself the cost of professional help can be found at the bottom of the page.
Unfortunately there are times as a professional roofer when I have to kill wasps. I don’t like to kill anything as a rule, but two things have coloured my opinion over the years…

How to kill a wasps nest – This video shows how to use a wasp power to eradicate a wasps nest. The same method can also be used anywhere an entrance to a nest can be seen.

Here is a quick list of what I think are the best wasp killer with pros and cons as I see them. I have used these products and many others over the years and this is what I have found.

How to identify wasps

The first thing is to pick your fight. The most common pest wasp here in the UK is the Yellow jacket or common wasp (Vespula vulgaris). With an average size of 2cm or less these tend to live in colonies and scavenge for food meaning they come into contact with us a lot. They’re often found pestering you when outside having a drink or in pub gardens arguing with you over who owns your drink. They can be aggressive, especially to the end of late summer when they feast on rotting fruit. The best time for killing these may be in the evening when they become more docile. For a nice list of wasps with pictures try here.

The common wasp – If your wasps look large or strange in any way it could be a species you should not be killing or a Hornet, and it could belong to a hornets nest. At this point extreme care should be taken, consider many Google’s before attempting anything. I would contact a pest control company at this point.

How to kill a wasps nest

The first time you notice you have a wasp problem it will almost certainly be because of wasp activity around a certain part of your home. In the UK this is usually somewhere around the roof, fascias,, eaves, guttering or air vents. Occasionally though it can be under the lawn, in a shed, on rocks, under slabs e.t.c. In my experience if you can spot more than 2 or 3 waps at the entrance to a nest at any one time as they queue up to enter around every 60 seconds, there could be enough wasps to get stung quite a bit if you’re ham fisted in your approach. Softly softly catchee monkey…

Approach the nests entrance calmly picking a time of the lowest activity with your chosen method of wasp killing agent primed and at the ready. For me this would mean holding my powered insect killer slightly inverted so the power shifts near to the puffing part of the container ready to deliver a single shot of powder on the approach to, and into the hole or holes. Calmly and without fast movement apply the killing agent, then walk away to observe and pick another time to apply some more. This can be up to 5 or 10 minutes later after the wasps have stropped swarming around the entrance. Two or three repeat applications may be required to kill the whole nest, although this gets easier as they become more confused, lethargic and dead.

Killing wasps in a roof or at height

Most of the wasps nests in roof spaces I have found for some reason are lower down in accessible areas from a ladder alone, this does not mean it is without risk though. If you are thinking about tackling this job because you are competent and comfortable on and with a ladder like me, take a moment to just think it over.

Firstly you will need to be competent at height and ladder safe with a good set of non damaged ladders. Those wooden ladders that have sideways lateral movement, slight woodworm, and a hint of wet rot, that you dug out of a bush near the canal will not be suitable.

Secondly you will need a firm base and someone to foot / hold the ladders. The best person for this isnt Grandma or Grandad if you’ve had to wrestle them off their zimmer frame to help, or your 5 year old son.

Lastly, will you freak out? If you think that even with the skillset and assistance above you may rush, climb quickly, or have any sort of clouded judgment in the event of being harangued, investigated, or even stung, call in the pro’s. You will need to remain calm and unrushed at all times.

If you decide that it is either too dangerous or difficult to kill your own wasps why not call in the local Council or a pest control company. Often before undertaking roof work I ask a customer to do exactly this so they are not paying for my time waiting for wasps to die. Local councils generally charge somewhere between £35 and 50 to eradicate a wasps nest, but there can be a bit of a wait during peak times. If you call out a private company, who are generally quicker to arrive, the average price seems to be between £40 to £100.